My notes on Namibia: Is a national park the same as a zoo? 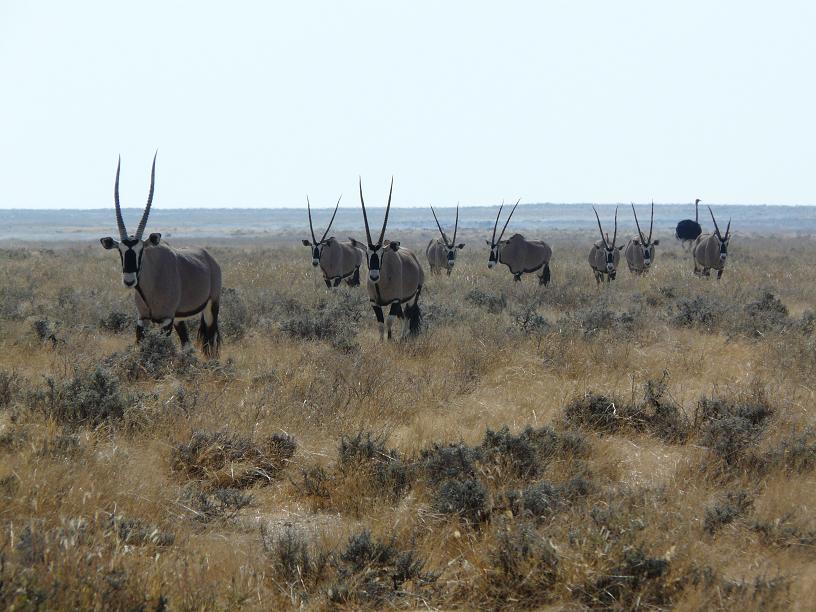 Namibia is one of very few places where animals can still be seen and observed in the wild, although someone might say that national parks don’t count as wilderness as they have fences. Well, in a way it is true, but do you think 23 000 sq km is a cramped place similar to a zoo? If you don’t know, just believe my word – it is a huge space! So, I visited the most popular national park in Namibia called Etosha.

“Etosha” means “a big white place”, and here I totally agree that its name stands for itself 100%. The soil itself there is grayish-white; plus, a large space in the park is taken by Etosha Pan which is a waterbed that used to be an inland sea millions ago.  Since very long ago, a couple of tectonic changes happened there and some rivers changed their direction, the sea has been gradually evaporating. This dying sea is called “a pan”; it still keeps water for a month or so after a heavy rain, but during the rest time of year it is dry and white because of the ancient sea salt.

Etosha National Park is a great place to visit because here you don’t have to take a guide or a safari trip from the tourist office; here you can explore the park on your own, at your own pace in your own or rented car. One of few (but reasonable) restrictions here is that you have to stay inside your car at all times. There’s another rule (also very reasonable): “animals have the right of way”. I wonder if one dared to do it differently with a family of elephants walking towards them or a line of hundreds of zebras crossing the road in front of their car. I didn't.

It is hard to believe but right after I entered Etosha (for some people "a big zoo"), I saw a flock of guinea fowls, a couple of warthogs and a giraffe at a distance of 10-20 meters from the road. The further I drove the more animals I saw. It was just unbelievable – in two days that I spent in the park I saw about 20 different kinds of animals and about 20 types of birds; literally, thousands of them! Every five minutes or so, there was something to see, watch and admire! The time of year was just right for seeing this many animals – it was getting drier and drier and animals of all kinds headed towards the few waterholes that always have water from the underground sources. So, one group after another, like actors in a show performance, on the scene (near waterholes) appeared zebras and springboks, rhinos and wildebeests, giraffes and kudus. Even at night the show went on – at the waterhole inside the camp I saw elephants, and zebras, and rhinos, and jackals, and many kinds of antelopes. I wanted to see lions and leopards at the waterhole, but, unfortunately, none of the big cats came that night. Instead, the next day, when I drove to the closest to the camp waterhole, I saw 13 lions laying lazily in the sun and watching a group of springboks and zebras. What a sight!

It was impossible not to get thrilled by spotting graceful long-necked giraffes at a distance, watching big mighty elephants not moving an inch for several minutes, observing the hierarchy between the groups of animals. I wish I could come to Etosha again one day. I hope all its residents will be fine and safe in the many years to come.