My notes on Namibia: Local people of Namibia, myths and truths 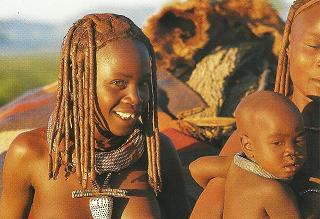 Namibia is a land where harsh but very friendly people live. The country’s population is only about 2 million people and most of them live in larger towns and cities. However, there are still tribes that live in remote places where I would love to go, but didn’t have time during my first visit.

It is interesting to know that one of Namibian local peoples, the Bushmen, are considered to be the ancestors of all people on the Earth. They lived there about 60 000 years ago when all continents were one; and since then, their life has changed but not dramatically – they still populate the most deserted places and face the harshness of nature almost bare handed. For the last 350 years ago or so, the Bushmen have been struggling against one more enemy – the arrogance and greed of the white people. Since they came, the birth rate of the Bushmen decreased considerably (now they make only 3% of the population), mostly due to the loss of their habitat, which led to the change in their diet and made the content of protein and vitamins in it even poorer than before.

The Bushmen are the most studied watched, filmed and researched tribe on the planet. If you’re interested in the way of their life, you can watch the film “The Gods Must Be Crazy”. It is a little too romantic but still gives a good insight into the way these people used to live. Yes, “used to”, as their lifestyle has changed a lot – they don’t go hunting and they don’t wear lion skins any more, although as this way they look a very rare kind, film crews keep coming to the Bushmen villages and pay money to the local people to perform a hunt for them which the Bushmen gladly do. Why wouldn’t they if they get paid for a little play?

There are other tribes of people that inhibit Namibia. Unfortunately, I didn’t have a chance to meet any of them myself, so I’m posting scanned photos for you to get an impression of how picturesque modern people’s portraits can be.

Notes on the photos (find them in the Handout):

The Himba women and children are probably the most photogenic and photographed. They are easily recognized by the way they adorn their hair with a mixture of deep-red ochre powder with fat to protect it against insects and the sun as well as for keeping it clean – water for washing is very rare where they live. They usually wear a lot of jewelry much of which is symbolic; and their clothes is limited to a goatskin skirt. These people are semi-nomadic, they move with their cattle in search of suitable pasture.

The Herero women are another “highlight” of Namibia. They are easy to recognize by their clothes: thick and long multiple layered dresses (about 12 meters in each dress) and a huge bonnet which were brought to Namibia by Missionaries in the 1800s. The puritan newcomers just couldn’t bear the sight of half-naked local women and made them wear Victorian dresses which soon became old-fashioned in Europe but are still in use in Namibia.