From Viewing to Acting

Add to favorites
***This reportage of the session can be used as a metaplan for a video lesson. It is not focused on some specific video with timing and worksheets, but describes the principles of a successful lesson and thus can be applied to any other film viewing.
No doubt viewing authentic films is a highly effective way to improve listening comprehension, build up the vocabulary and learn communication. Drama in an EFL/ESL class is another powerful technique. In our English speaking club (Minsk) the lesson plan combined both of them, and this proved to be highly effective for:

Tip 1: Never show the whole film in class
The reasons for refraining from that are:
- People can do it at home, at their own pace, getting the support they need from dictionaries, subtitles and transcripts. They can also make pauses and play difficult parts as many times as they need
- showing an episode will give you more ways to organise a discussion: guessing the past and the future, asking questions, debating, etc.
Tip 2: The  piece should be appropriate to the participants
What to consider?
- cultural needs: the situation and the actions should be potentially important for the participants and it should be culturally acceptible;
- language level: in each authentic video there are pieces with little laguage and pauses between statements, which will work well even for the beginners; and you should challenge advanced students with long talks of educated high profile people or not articulate slang of teenagers. These are jus two examples - there are many more difficulties of different types. Just be aware and choose an appropriate challenge;
- the generation gap: bare in mind that the students might be unaware of the events featured in the film, worship other film stars and film makers than those who appear in the film of your choice.
Tip 3: Ideas for the pre-viewing activities
- discuss the time and culture featured in the film
-elicit from the students information about the film-makers and the cast of the film
- find out, what they know about the film, and talk about the background events
- analyse the title, the scenes from the film and make predictions about the plot, the genre, the developments, etc.
Tip 4: During the viewing part of the lesson, plan pauses in advance, anticipate the difficulties, check understanding, give comments and discuss cultural differences. 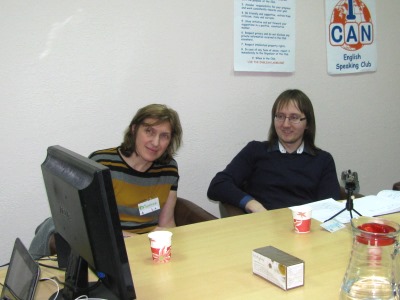 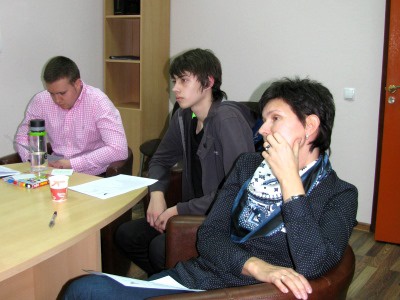 Tip 5. Prepare a worksheet for a follow-up activity. In our case it was a gapped transcript, and the participants engaged in interactive discussion to remember the exact word uttered in the video and gapped in the task.
Tip 6. Finish up the viewing part of the lesson with second viewing.
Now, equipped with the words in the follow-up, the viewer are sure to get satisfaction from viewing the film.

The Drama Part of the lesson plan
Step 1. Discuss the characters, their psychology, reasons for their behaviour, cause-effect of the events.
Step 2. Distribute the roles. Remember, that our job is to help our students devolop, so that should be happy about what they are doing in our EFL/ECL class. If they do not feel confortable abour performing the role you wish to assign, modify the role, the character or replace it altogether.
Step 3. Discuss with each participants their character, help to adapt the language from the script to their level of competence.
Step 4. Do not spend too much time of rehearsal. Even if you cherish an idea to win Oscar one day, it will definitely not happen after this video lesson. Our job is to teach English, so focus on phonetics, intonation, body language, which acting can be accepted when reasonably good.
Step 5. Allow the participants to improvise. This is where people will really have fun and will have to use their wits.

This is how it was done in ICAN Club:
- modelling characters according to the scene on the screen. 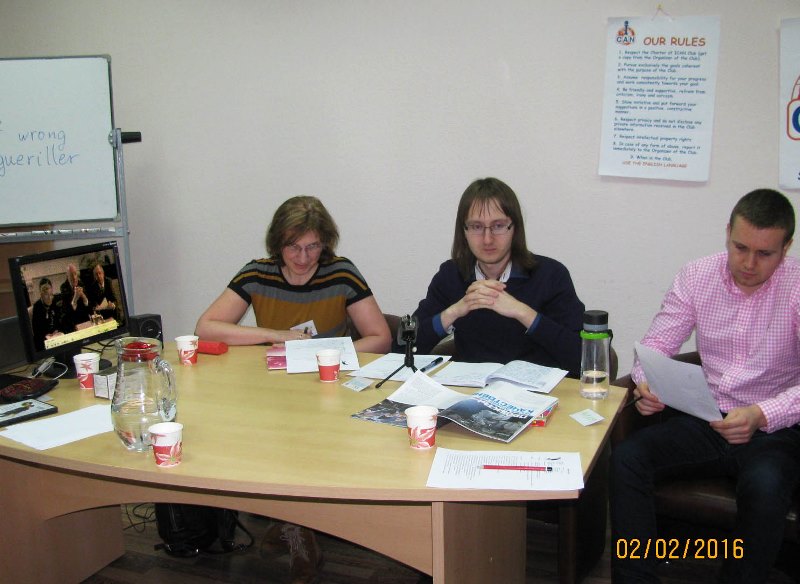 - introducing an extra character, since we had only four in the episode.
Zhenya had to respond to a doble challenge, as he has not actor to copy from. He had to build his identity, adapt the language from the scrip to his needs, and also improvise a lot. And I am happy to say that he was brilliant in doing that. 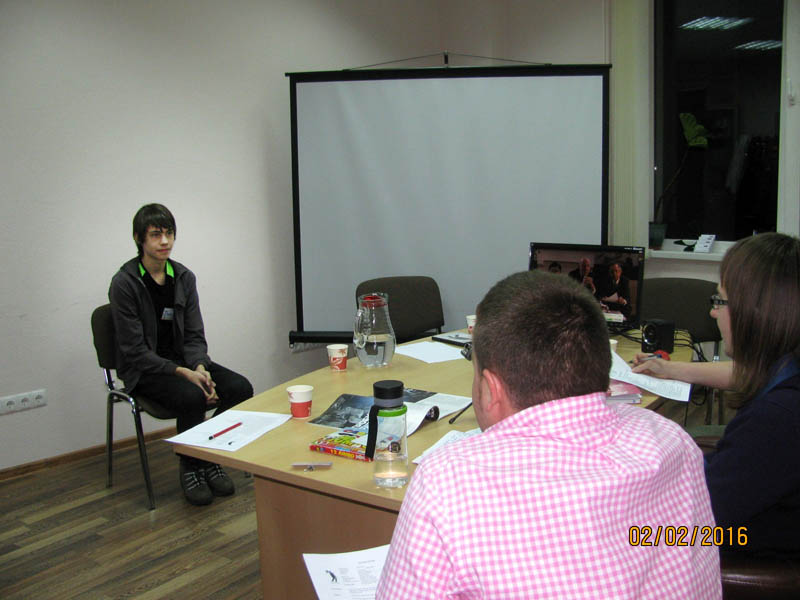 - the "scary board" is examining the file of the second candidate 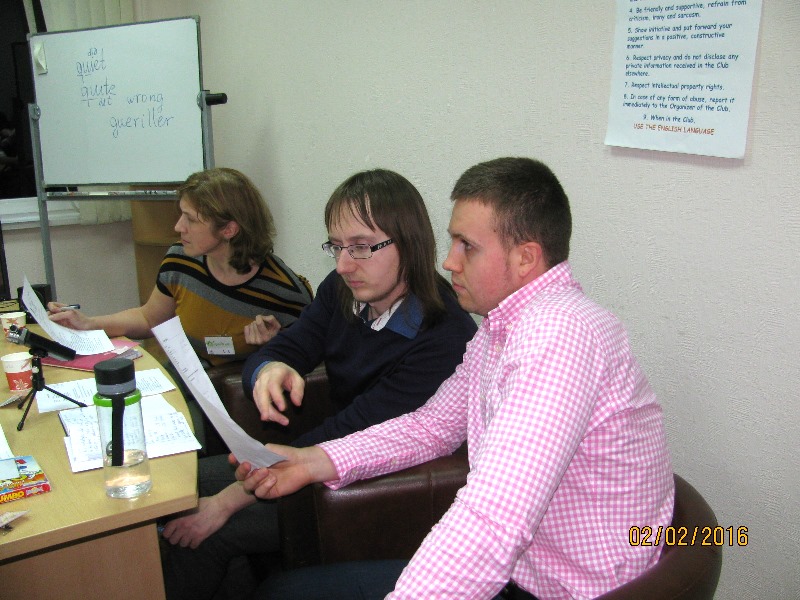 - and during this procedure the interviewee has to sit under their sharp looks. Here you can see how Ina demonstrated the change of her character's state from being nervous through speaking professionally to getting confident and succeeding in getting what she was after.

And the convincing talk of the interviewee makes the "scary board" confident and happy too. 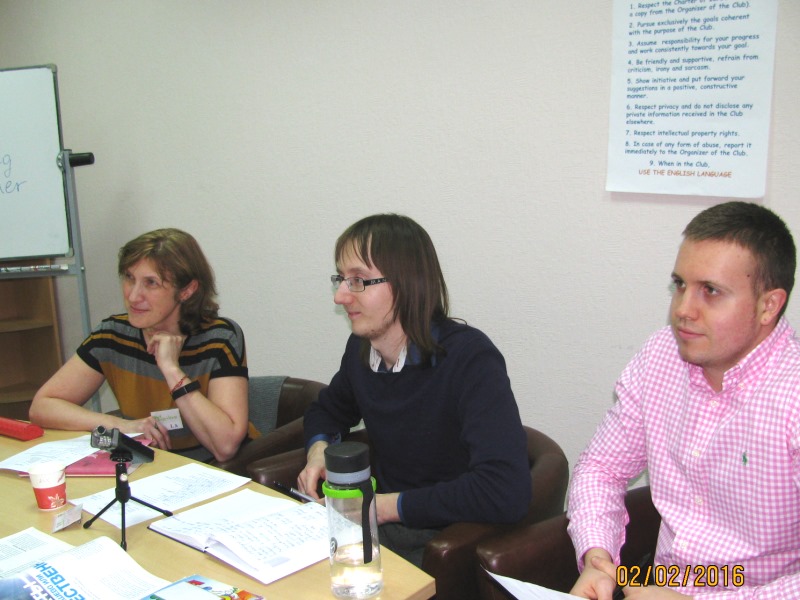 This is how to get a double advantage from viewing a video in an English class: developing listening comprehension and communication skills.

Hopefully, the participants will give their feedback in the comments.

And how do you work with video in EFL/ESL classroom? What are your observations and findings?
Please, share them in the comments too.