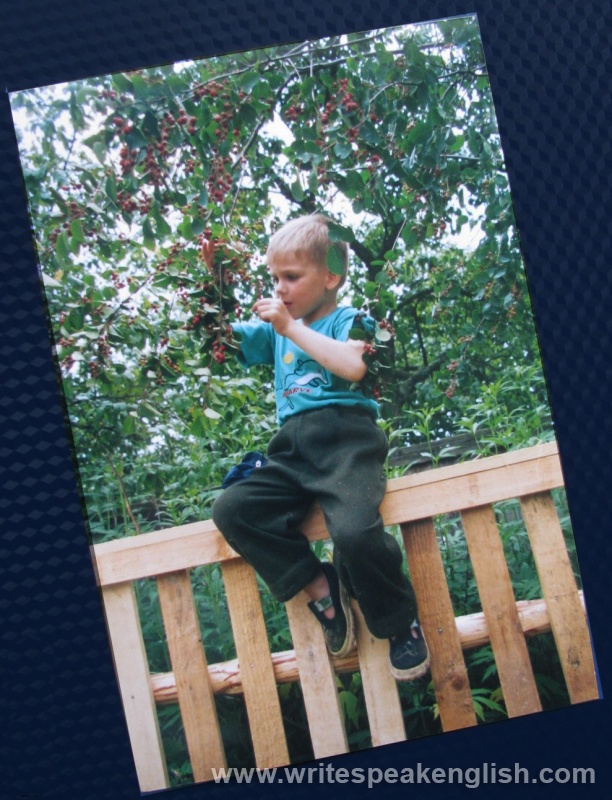 Serviceberries, the Taste of Childhood

It is no secret that we often make choices not by weighing objective pros and cons, but by impulses, intuition, unexplainable likes and dislikes. These choices might look weird, if we do not get judgmental and try to understand, we will learn something that is usually hidden from an uncaring eye. Today I would like to tell you a story about the berries I like the most and explain why.

The shrub you can see in the pictures is called serviceberry (Amelanchier). It is also known as  shadbush, shadwood/shadblow, wild pear, juneberry, saskatoon, sugarplum or wild-plum, and chuckley pear. Impressive, isn't it? In Belarus it also has got some nicknames, such as "berberis" and, more interesting, "shpanka", which literary means "berries for street urchins".

Why is it called like that? Today's children, probably, have no idea of these berries, as nowadays we have a choice of fruit and vegetables from all parts of the world all the year round. But in the past, in the 1960s and 1970s, when the country was still recovering from WWII, we suffered shortage of fruit  in winter time. So, families had to make preserves for winter and used "better" fruit and berries, such as strawberries, cherries, plumps and currents, for these purposes. As for serviceberry, which is unpretentious and easy to grow, nobody cared – people would plant it near the house for kids to be able to pick berries anytime they wanted.

And this indeed was a nice activity for kids in the village. The shrub grows 2-3 meters high, and as most of the berries are on the top, they are out of the reach of children. Unlike a tree, the shrub's thin stems do not allow climbing. So, harvesting the fruit is quite a challenge. Now, looking back, I think that picking those berries was a skill boosting activity.

There were basically two ways of getting the fruit. If your serviceberry grew near a fence, you could climb it, and then balance on the fence while trying to reach for another twig with dark blue mouthwatering clusters of fruit.  But in most cases, kids had to team up with someone bigger, a teenager, who would be able to jump high enough to get hold of a thinner part of one of the stems so that to make it bend, but not break. Younger children were to catch and hold the top of the plant, which had plenty of berries, and keep it down until the berries were eaten.

If you did not jump high enough to cling onto the right place, you wouldn't be able to bend the stem, or it would lift you into the air, and you would have to jump down through the branches and twigs scratching your arms, legs and body. Letting the stem go up was also a skill: you had to take care that no faces were hurt by the twigs.

Eating with dirty hands? Washing the fruit before eating? Who cared! People didn't use pesticides or herbicides at that time, and there were few cars in the village, so there was neither dust, no heavy metals in the air.

For some reason, my aunt didn't have a serviceberry shrub at her place. So, each time I wanted those berries, I had to ask a neighbor or another relative for permission to get some, and, being a considerate girl, I ate just a little bit and never had enough. Shortage makes the desired object grow in value, thus those common little berries became special for me. Since then I have missed their sweet taste and almond-like flavor of the seeds and have felt nostalgic every time I have seen them. It has become my comfort food, associated with the sunshine, carefree time of childhood and the feeling of achievement. Although later I grew serviceberry in my own garden and had enough of them, they still have that special taste of childhood. 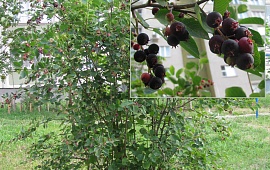 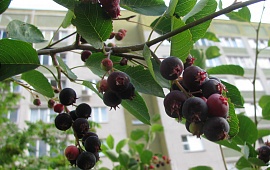 I like this berries so much! We had three trees near the school. Me and my classmates eat berberis after lessons (without washing))). This text is about my childhood, too!

I like this berries so much! We had three trees near the school. Me and my classmates eat berberis after lessons (without washing))). This text is about my childhood, too!