A Tragic Death a Day Before Victory. A True Story from a WWII Veteran

The soldier in the photo is my father, Stepan Fiodorovich Sidorov. The photo was taken in 1945. He was 23 years old then.
My father joined the Red Army on July 12, 1941, a month after leaving secondary school, and finished the war at the Elbe in 1945.
He served in cavalry, in a forty-five-caliber gun squadron. During defense operations those light guns were often used in the front line to destroy tanks. The soldiers were literally looking death in the face during each battle.

In 1997 my father published a book of memoirs, where  well-known historic events of WWII, such as battle of Stalingrad, liberation of Belarus, meeting the Americans on the Elbe are described as they were experienced by a rank and file soldier.

Here is an episode from his book that describes events of May 1945, right before the Victory.

... On May 02, the ‘Berlin operation’ was successfully completed. The capital of Germany was taken. Upon hearing this news, we were inspired. Talk amongst us was incessant:

"Can you believe it? The war is nearly over!"

"Yes! We are heading to the Elbe - there are Americans on the other bank! No enemy to fight! I am sure we will hear about the Nazi's capitulation any minute now!"

However, it was too early to become carefree.

We were not aware that casualties still lay ahead.

Albert Bogush was the youngest soldier in our artillery squadron. Still under 18, it was only very recently that he had been called up to service.  Albert was our wireman. He didn't have a horse; and instead moved around using a bike.

By the time Albert came to the front, everyone in our unit had already received war related accolades, orders and medals, of which many of us had several. Albert was an exclusion in this regard. He didn't have a single medal. The reason was plain: having joined the front when he did, there had been no opportunity to earn such accolades. Albert was deeply burdened by the fact that he was ‘empty’ in this regard. The thought of returning home empty handed ate at him, and he was avidly seeking an opportunity to join the ranks of the ‘worthy’. Someone advised Albert that if he captured a German soldier, who were still hiding in the forests, he would receive a medal. As a result, young Albert was acutely alert to his surroundings, and was on the look out for a chance to ‘earn’ his medal.

On that day the squadron was riding fast through a forest trying to get to the Elbe as soon as possible. There were no enemies, no fighting. Suddenly Albert noticed someone crossing a fire break, and without saying a word to anyone he took chase. His platoon commander noticed what happened, and quickly instructed a soldier, named Dunin, to stop Albert. Dunin turned his horse and galloped after him. But right at that moment German soldiers, who were hiding in the forest, attacked us! We fought back, and our collective attention was drawn away from the young wireman. It was only after the battle, once the enemy had withdrawn back into the forest, that our commander Captain Gorobchuk turned to Dunin and said:

"You had an order to return Bogush. Why didn't you carry it out?"

"I could not catch up to him. My horse got shot. The fighting began. I was obliged to return."

Captain Gorobchuk ordered a search of the forest. The platoon rushed in, surrounded the area where Bogush had made a turn into the fire break and started raking through the area.  The Germans, who were hiding in the forest, understood that there was no escape; they surrendered. When we reached the fire break, we made a tragic discovery. We found the dead body of young Albert, with Dunin's horse always lying motionless at a distance.

What a tragic, stupid death! We were terribly upset by the loss of Albert; especially given that he was so young, and in light of the fact that his death could have been avoided.

We all understood that Albert could not imagine himself coming back home from war without having earned any accolade. We understood his fear of being mistaken for a coward or the like… 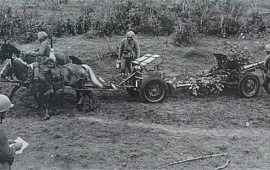 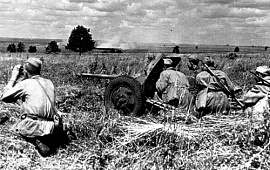